Recently the Ray Morgan Company Corporate office employees participated in the “The Lord’s Gym Mud Run” in Oroville, CA.  The mud run offered the Ray Morgan Company team an opportunity to compete against other local business teams for the coveted title of “Baddest Business.” Each team is judged based on Team Unity (costumes and attitude), team strength (in a giant Tug-of-War tournament) and Team Time (completion of the Mud Run course as a team).  Located behind Feather Falls Casino, the five mile course included 20 obstacles, which included crawling through mud pits, scaling a climbing wall located in a lake, and swimming across an ice bath.

Here’s what the Ray Morgan Company team had to say about The Lord’s Gym Mud Run:

“I thoroughly enjoyed the company of our team, we had great spirit and team effort! I am also a big fan of pushing myself outside of my comfort zone and testing my physical and mental limits. There is no greater feeling than that of accomplishment. We didn’t win the “Baddest Business Bell”, Costco did, but we will train well for it next year! Our race time was 1 Hour, 57 Minutes and we placed 14 out of 21 teams.” – Robyn Ziegler, Team Captain

“It’s amazing to see how far you really can push yourself” – K.C. Piercy

“The race was tough, but we did it together and have the bruises to prove it! ”- Brynn DeBarr 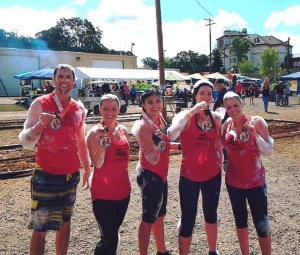 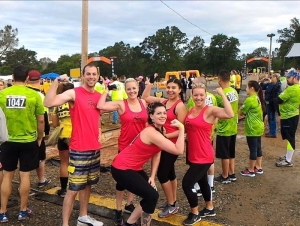